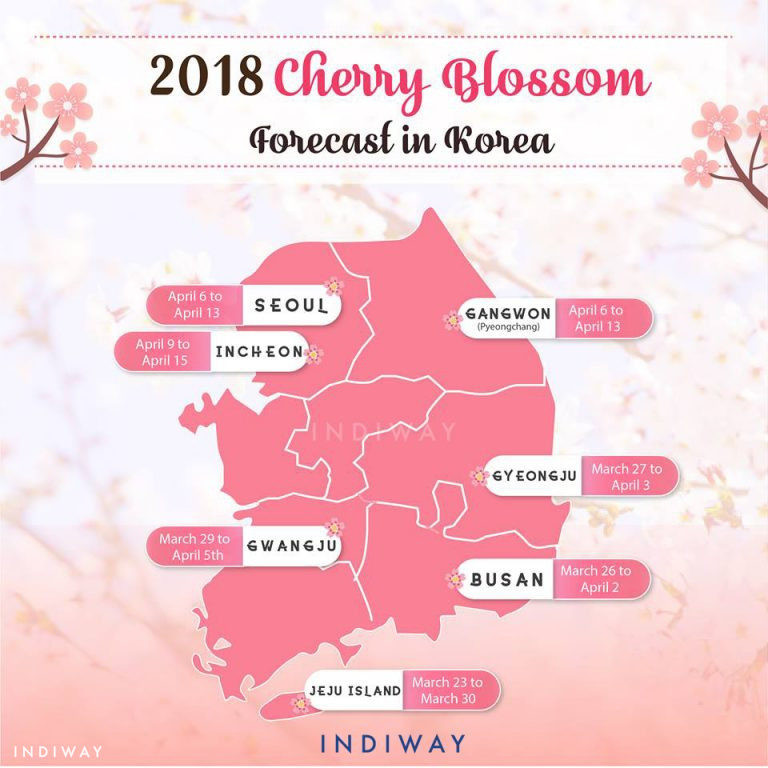 This is the cherry blossom forecast in Korea 2018. The cherry blossom can be unpredictable at times and no one knows when flower blooms in this year. Please just refer it before you make itinerary.  For example, it can arrive a few days earlier or later, in which case you might not catch it at it’s bloom peak. It’s very tricky to time because the flowers literally will bloom and then suddenly disappear in just two days. 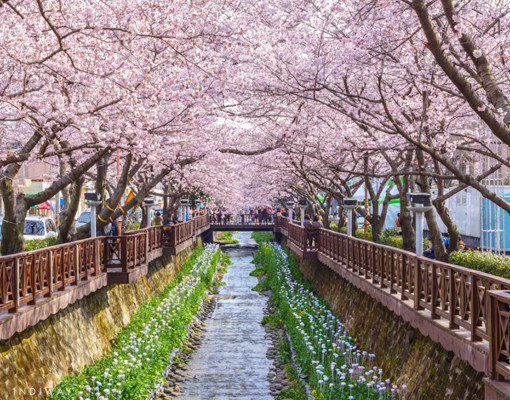 A world-class cherry blossom festival is held annually at the beautiful naval port city of Jinhae. The festival was first held on April 13, 1952 as a small ceremony commemorating Admiral Yi Sun-shin, a Korean naval hero who played an important role in defeating the Japanese army during the Imjin War (1592-1598). Today, it has become one of the largest festivals in the country, with approximately 2 million visitors annually. The endless canopy of cherry blossoms over the entire city makes a dazzling sight that awes everyone.
– Festival date : 2018.03.30 ~ 2018.04.10
– Location : Yeojwa-dong, Jinhae-gu, Changwon-si, Gyeongsangnam-do, Korea 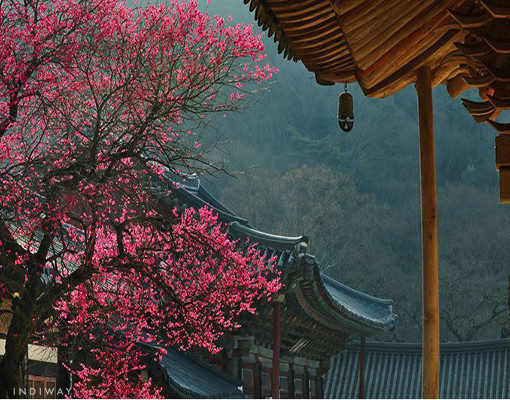 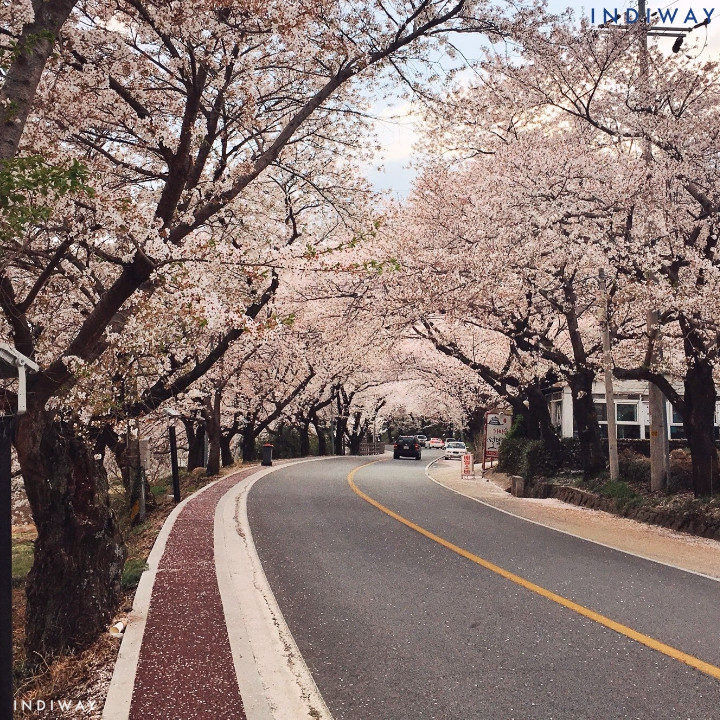 The nice cherry blossoms flutter up to 4 km distance and call for spring brilliantly. The flower way of Hwagae is a road well-known for 4 km cherry blossoms. It is so called a wedding way because young man and woman loving each other walk with their hands held on this way like a dream road and will live together for a long time. Thereupon, numerous young men and women walk on this romantic way with their hands held by taking an oath for love. The cherry blossoms that bloomed like the white snow are embroidered on the 25 km interval of the clear stream of the Seomjin River and Hwagaedongcheon so that the brilliant things to see are provided to enjoy the mood of new spring and the various cultural events are held. Moreover, you can taste somewhat fragrant spring greens of Mt. Jiri produced by the people of Hwagae village by themselves and enjoy the spring festival in the flower party where you can taste the hometown food such as Euneohoe, Jaecheopguk, and Chamgaetang.
– Period : 2018.03.31 ~ 2018.04.08
– Venue : Maekjeon-gil, Hwagae-myeon, Hadong-gun, Gyeongsangnam-do
– Click Website for more info 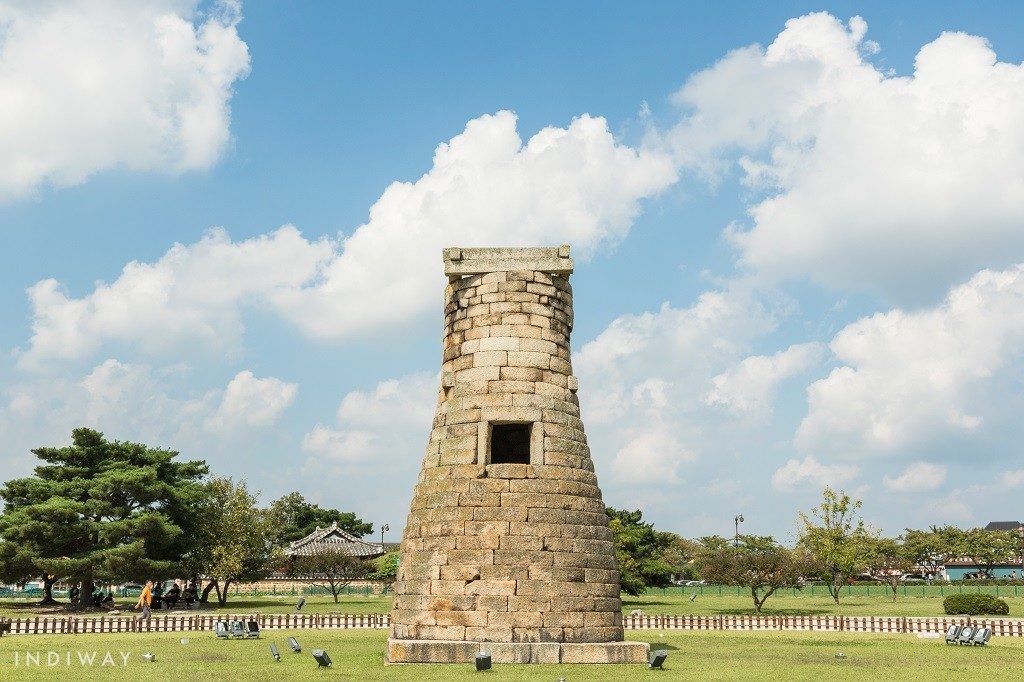 Cheomseongdae is the oldest existing astronomical observatory in Asia. If you go there at the proper time, you’ll see the beautiful yellow canola(Yuchae) flower blooming along with cherry blossoms..
– Address : 839-1, Inwang-dong, Gyeongju-si, Gyeongsangbuk-do, Korea 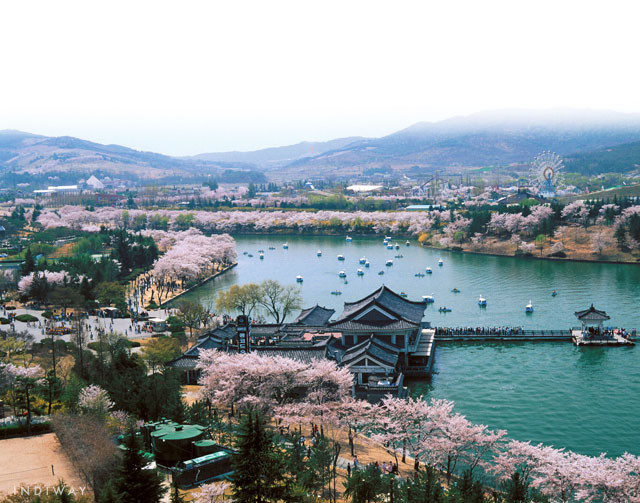 Gyeongju city is completely covered by cherry blossom in April. Especially Bomun complex is the best around Bomun lake. This place’ the only flaw is that it’s too famous thus crowded. So you better hurry in the morning and finish your sightseeing by noon. Then you might be free from heavy traffic around the place.
– Address : 402-12, Bomun-ro, Gyeongju-si, Gyeongsangbuk-do, Korea 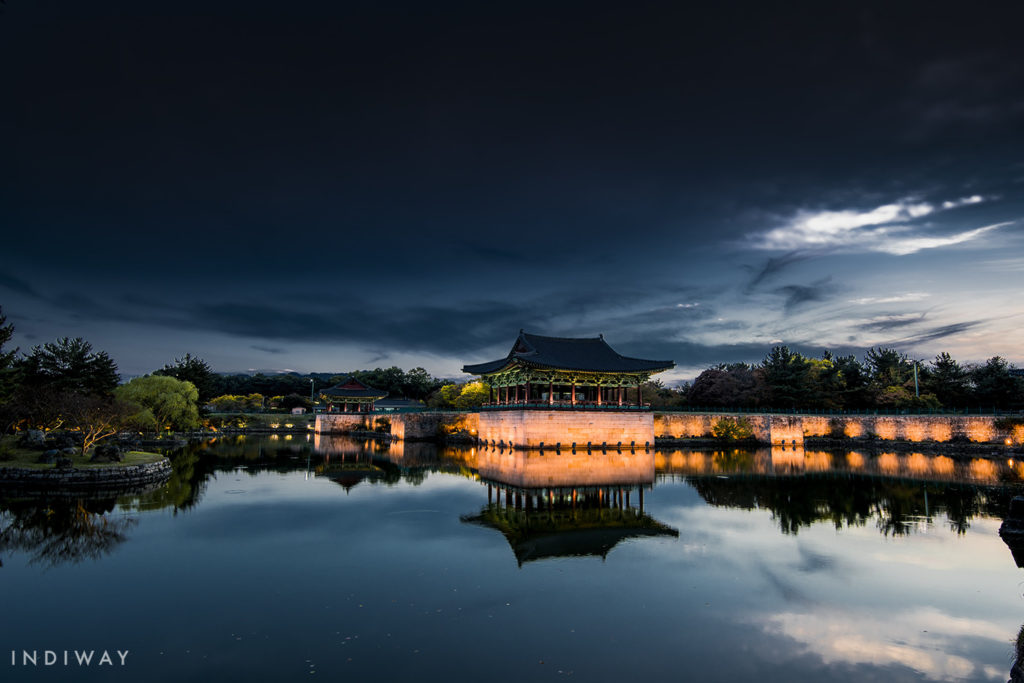 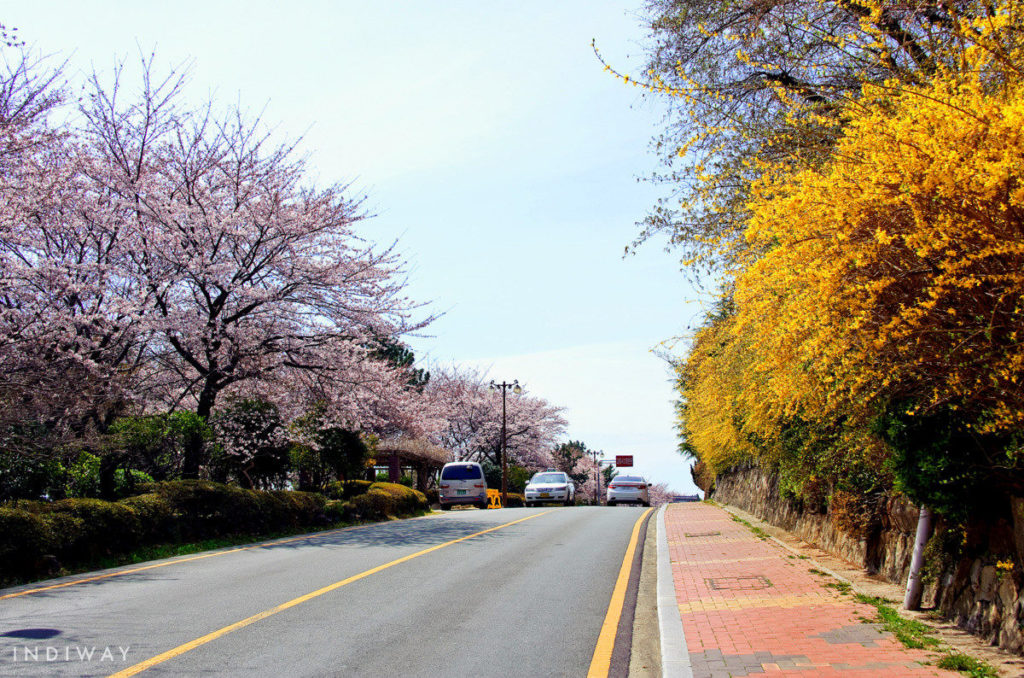 Dalmaji-gil Road is a small walkway on the corner to Songjeong Beach and boasts beautiful cherry blossoms and pine trees, which are located just beyond Haeundae Beach, on the slope of Mt.Wausan. The landscape, with the blue sea, sandy seashore, and pine trees, is beautiful enough to be the representative place of this area for a long time to come. The Dalmaji Hill has 8km driving course(The 31st National Highway) is one of the most beautiful driving roads in Korea.
– Address : Jwadongsunhwan-ro, Haeundae-gu, Busan 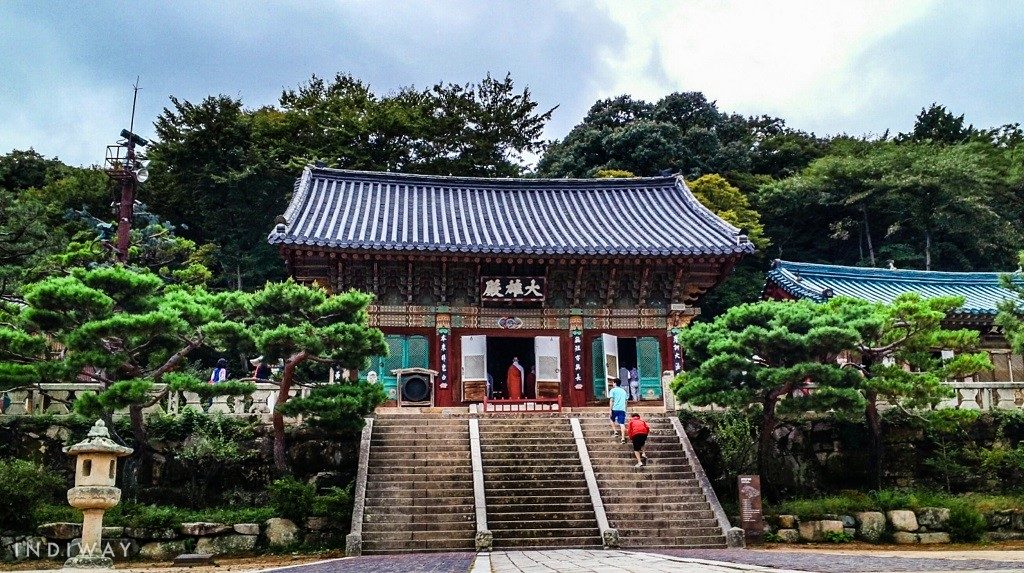 Beomeosa Temple is located at the edge of Mt. Geumjeongsan, a famous mountain in Busan and has 1,300 years history. It will give you the chance to take time travel with cherry blossom in spring.
– Address : 250, Beomeosa-ro, Geumjeong-gu, Busan, Korea 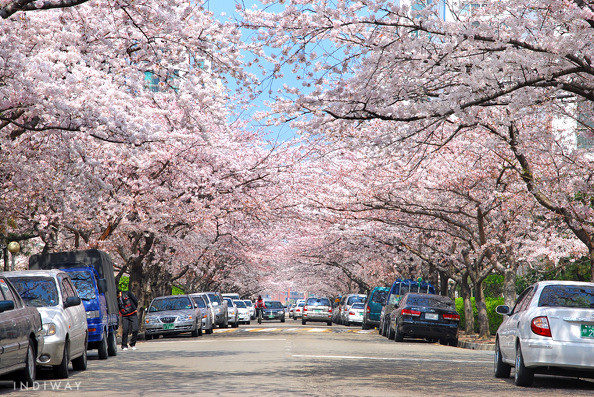 If you are finding out hidden places where locals only know in Busan, this Namcheondong Samik town area is perfect for you! When spring comes, Busan locals naturally remind beautiful cherry blossom tunnel in this area and love to visit every year. When the wind blows and the flowers seen to rain from heaven it just adds to the magical effect. As it is close to Gwangalli Beach, this area is a perennial favorite among citizens from other provinces and countries.
Busan constructed a housing site on this reclaimed land. To make better landscape, the community put efforts to plant numerous trees. Large cherry trees that are more than 30 years old densely populate the area and create a veritable tunnel of cherry blossoms.
– Address : 100, Gwanganhaebyeon-ro, Suyeong-gu, Busan, Korea 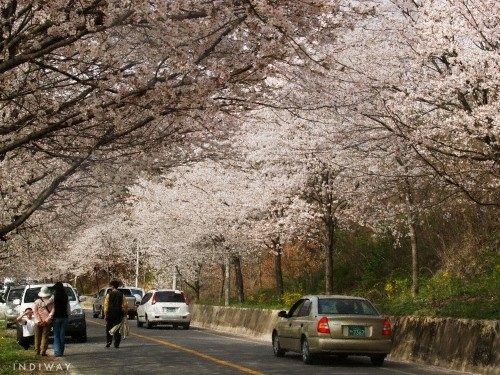 Alongside the only unpolluted river of South Korea’s 5 major rivers is the 3km-long cherry blossom path for which Gurye is famous for. The path was created in 1992, and drivers along national highways numbers 17 and 19 can enjoy the scent of spring while driving along. Few cars pass by, making the path ideal for strolling. The path is also a popular marathon course. The Seomjingang cherry blossom path was selected by Korea’s Ministry of Land, Transportation and Maritime Affairs as one of ‘Korea’s 100 Most Beautiful Roads.’
– Click Website for more info
– Venue : Seomjingangbank, Jukma-ri, Muncheok-myeon, Gurye-gun, Jeollanam-do 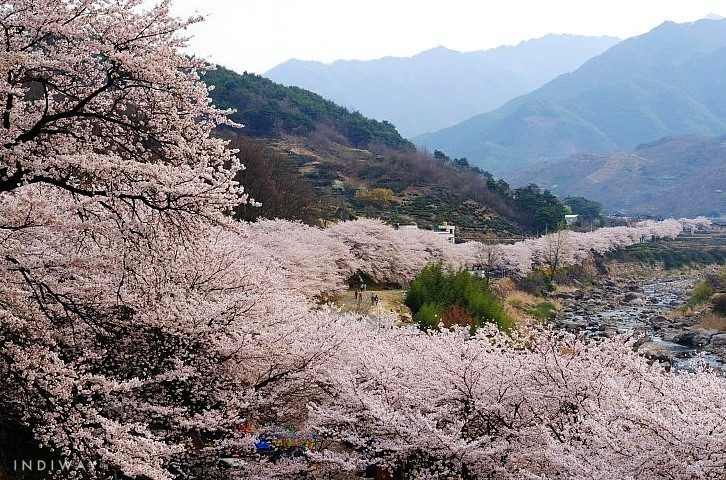 Daewon Temple (Daewonsa) is known to be one of the oldest temples dedicated to Buddhism. It was also influenced by Tibetan culture so this temple shows more ethnic arcitecture compared to other temples in Korea. The temple was built when the Shilla Dynasty was at power. At this temple, they have a unique way of worship; much of it is directed towards death. While entering the temple, the pathway is lined with cherry trees which makes for a beautiful welcome.
– Address : 506-8, Juksan-gil, Mundeok-myeon, Boseong-gun, Jeollanam-do
Jeonju Zoo 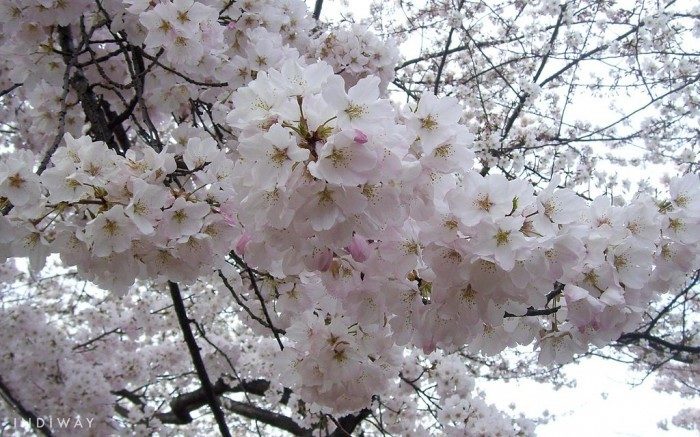 Junghyesa temples is located in the center of Jeonju city but it keeps its own peaceful and elegant atmosphere. It has 110 years history and was founded for educational institution for monks. This temple proves how temple can be harmonized with nature beauty. It is hidden places that locals even do not want to share and photographers take this temple’s attractiveness in every season.
– Address : 2, Hyoja-dong 1-ga, Wansan-gu, Jeonju-si, Jeollabuk-do, Korea 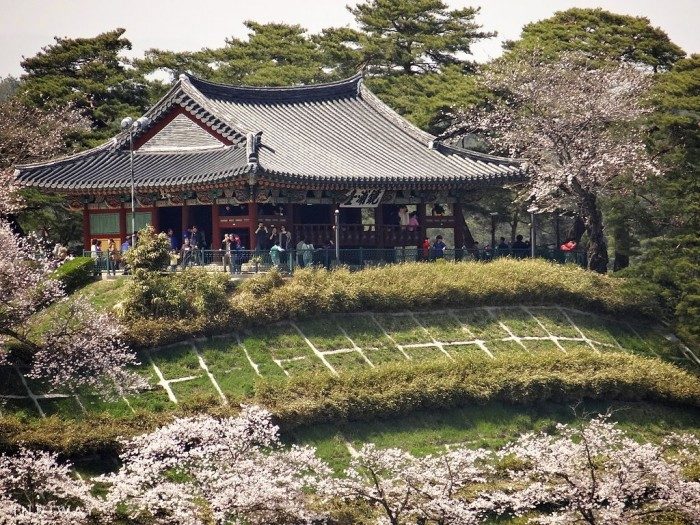 Gyeongpo Cherry Blossom Festival takes place at the center of Gyeongpodae Pavilion, the 6th regional tangible cultural treasure of Korea, when cherry blossoms on trees on the 4.3㎞ path around Gyeongpoho Lake are in full bloom. During the festival, various cultural events and flower exhibitions are held against the backdrop of the beautiful cherry blossom covered Gyeongpodae.
– Address : San 1-1 Anhyeon-dong, Gangneung-si, Kangwon

https://www.instagram.com/p/BhJbemVnQZb/
This driving road is the only one that you can enjoy cherry blossom and rape flower at the same time. This place gets popular and attracts locals as well as tourists on every April.
– Address : Gasiri, Pyoseon-myeon, Seogwipo-si, Jeju-do, Korea

If you ask where is the most romantic road in Jeju, locals will answer that you should have a walk at Jeju National University. Numerous family, couples go this area to appreciate spring with cherry blossom. We strongly recommend you to take a walk in Jeju national university if you already enjoyed famous driving roads in Jeju.
– Address :  1, Arail-dong, Jeju-si, Jeju-do 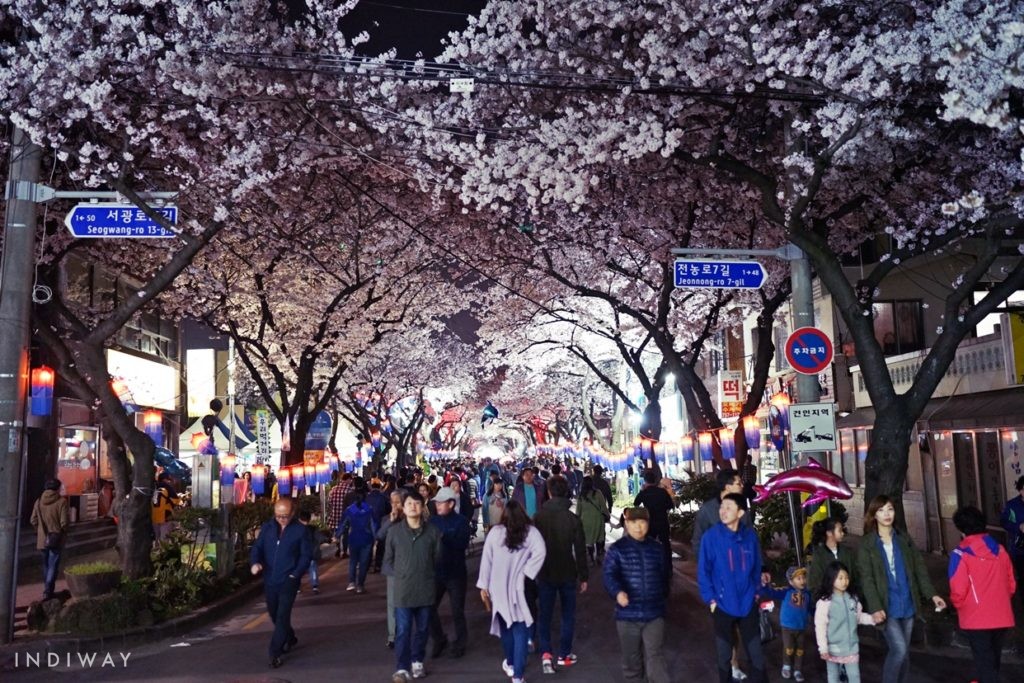 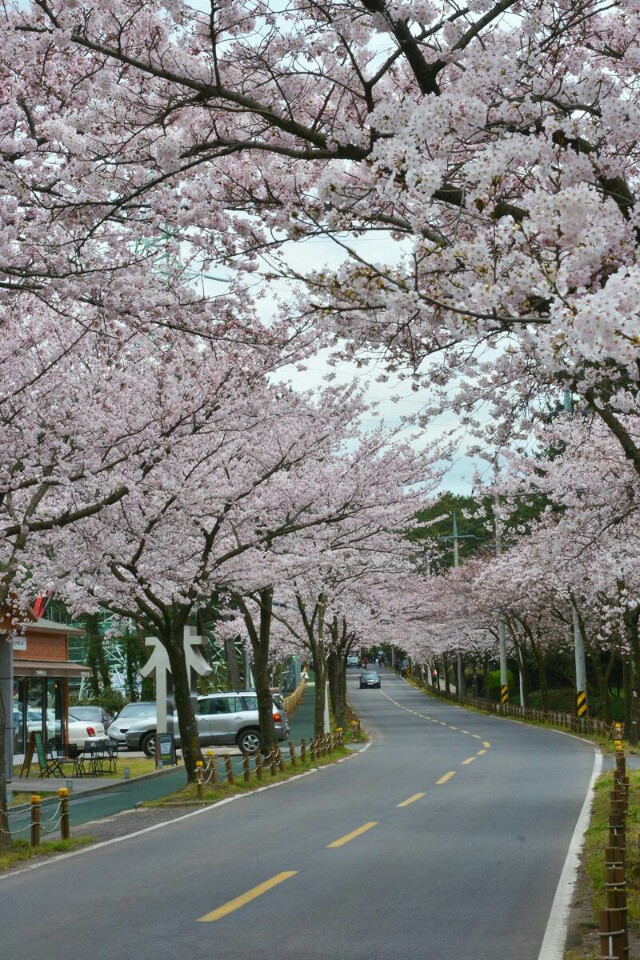 Jeju’s King Cherry Tree blossoms can be seen all over Seogwipo’s downtown area and the surrounding Jeju Sports Complex. The petals of Jeju’s King Cherry Tree blossoms are the largest and most luxurious among all the cherry blossoms. The King Cherry Trees fully blossom for only 2 to 3 days, during the festival period in April. Come listen to the soothing music as you take a romantic stroll down the gorgeous cherry blossom boulevard on beautiful Jeju Island.
– Address : 24, Seogwang-ro 2-gil, Jeju-si, Jeju-do
제주특별자치도 제주시 서광로2길 24 (오라일동)

How To Make Your Reservations

Kindly note that we only accept reservations on our website. Please go to the particular product page to book right way!
Also, please kindly note that heavy traffic condition will happen during these festivals period. When you make your itinerary, please avoid rush hour(7:00-9:00/17:00-19:00) to make convenient and safe trip after considering these festival area and time.

How to take KTX Train