American premium burger chain Shake Shack, founded in 2002, was set to make its debut in Korea last Friday in Gangnam, one of Seoul’s most bustling and crowded districts around  Southern Seoul. The New York City-based Shake Shack is operating in 13 countries, it is very popular. Customers usually wait in a long line to order their food. Korea is the second country in Asia to house the burger brand with dining concept called ‘fast casual’ after Japan.

Shake Shack Gangnam offer four exclusive menu items to the  customers, there are the hi-light menu items which go to the signature menu with original recipes, named ShackBurger, included SmokeShack, and ShroomBurger. However why  has it to be about the burger meat? Because of the bun that is soft, squashy and crunchy, with toasting caramelizes the outside of the bun, and the American cheese from Wisconsin dairies for its creamy, salty flavor as well as for its meltability.

Additionally a  signature burger needs a signature sauce. ShackSauce is inspired by classic toppings of the ’50s: ketchup, mustard. The base of the sauce is a mayonnaise that Shake Shack makes from scratch. The goal of the sauce is to add multiple flavors to the burger including sweet, bitter, salty, smoke, and spice. The recipe, a closely held secret, has been revised “a few times” since Shake Shack opened, getting along with the ShackBurger is topped with a classic green leaf lettuce and tomato combo  because it is smooth but crisp. 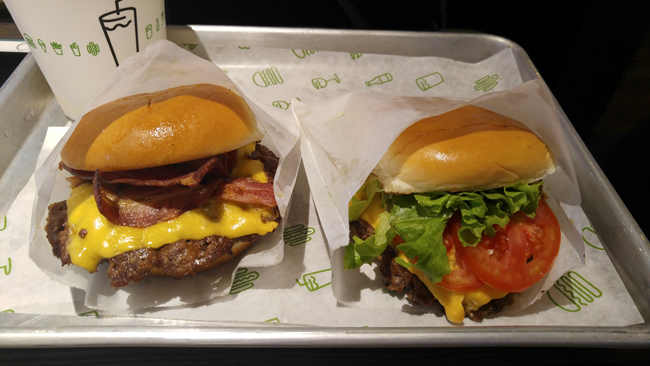 For its price, when comparing the price of signature menu ShackBurger in Gangnam is cheaper than the price in New York  and Japan by the same menu. Besides, throughout the daily hustle and bustle, Shake Shack invites guests to meet up and power up at the Shack with complimentary smart phone charging stations. Guests can drop by during lunch, in between visiting the many shops, even on the way out for the night. In order to illuminate the night life of Gangnam , Shake Shack has installed its own style of  art at dusk alongside the lively night lights, which inspired by the charming New York City lights.

This restaurant  starts  to serve for  its exclusive menu to you all at 11 am everyday.

Gangnamdaero 10 6-gil,  located between the Gangnam and Sinnonhyeon metro stations.

Where to try Free Hanbok in Seoul | HOW TO SEOUL