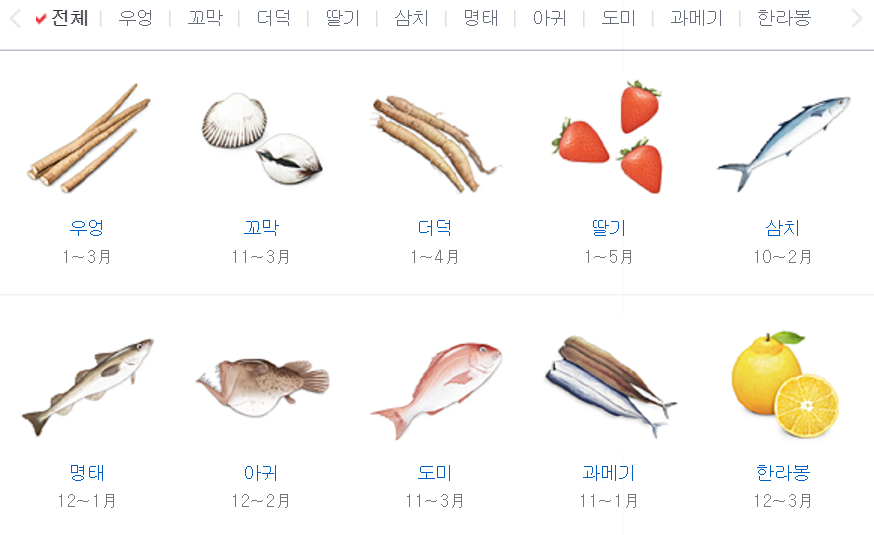 What are some the best food to eat in January?

This week in BnBHero we thought we could introduce some seasonal must-try food in Korea! Whether you are visiting Korea or thinking of cooking Korean food at home, check out this month’s list of hot seasonal items!

Called “우엉” (Woo-Ong) in Korea, it’s peak season is from January to March every year! A root vegetable with amazing texture, it has a lot of great health benefits and is an amazing diet ingredient!

In Korea it is most commonly eaten as a side dish (or inside your kimbab!) so check out these different recipes in English for grilled and roasted Burdock root!

Available for November to March, it is called kkomak in Korea and a great seafood item to try! Whether you go to a seafood restaurant by the beach and try it grilled, or as an ingredient in a seafood broth (such as handcut noodles!) Kkomak is very high in nutrients and also has a very delicious flavour that is said to awaken your tastebuds!

Or check out this video from Arirang talking about this great winter seafood dish!

Available from January to April, it is considered a relative of ginseng and a great ingredient to help bring back your appetite! It has a great texture, and is considered to be an amazingly healthy food ingredient!

While Bburikitchen gives you some information on this amazing ingredient, as well as tips on how to pick and clean the best deodeok!

Who doesn’t love Korean strawberries??
About some of the prettiest and most delicious strawberries in the world, they are available from January to May!
Because strawberries taste the best fresh and whole, we thought it would be silly to provide recipes for this amazingly addictive fruit!

Samchi is a type of fish that is available from October to February. It is great for your health and has high levels of DHA! It has a soft texture, making it a great protein for the elderly as well as children!

Samchi is also known as Japanese Spanish Mackeral in English, but it is best to ask if they have “samchi” in Korean!

Myeongtae is a seasonal fish that is available from December to January, so be sure to check it out while it is still fresh and seasonal! It has very low levels of fat and an amazing flavour.

It is also known as Walleye Pollack in English.

Available from December to February, there is a story that a long time ago because this fish was so ugly, fishermen would just throw it back into the ocean. However it has an amazing taste and flavour!

The most delicious in early Spring but available from November to March, Snapper is considered to be a delicious fish that can be served in a variety of ways!

Check out Maangchi for some Snapper recipes!

Check out Beyond Kimchee for an amazing broiled red snapper recipe!

Available from November to January, it is considered a must try fish in the winter to truly savour the taste of the sea. Gwamegi is actually not the name of the fish, but the way it is prepared- Pacific Saury is frozen and defrosted several times to create this very pungent dish!

Korea’s most famous and distinctive orange! Hallabong is from Jeju-Island and its peak season is considered to be from December to March. With a odd shape and an navel that sticks out very prominently, it is a great way to ensure you get your maximum Vitamin C!

So the next time you visit Korea, be sure to add these amazing seasonal items to your list of food!

Top 5 filming locations of the MBC drama “She was pretty”! Are you curious?